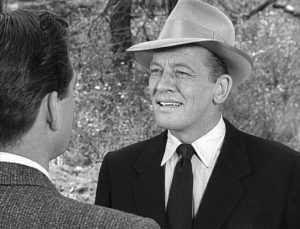 Ok, for those of you unfamiliar with the Perry Mason television program none of this will mean anything to you, so I feel no obligation to explain it all and provide loads of background.  Cut your loses now and click on to the next post.  For those of you who are familiar with the program this will make sense, though you may strongly disagree with my premise here.  Hamilton is very popular among Perry Mason fans, and for good reason, he does indeed have some endearing qualities, but that’s not what I’m kvetching about.

Hamilton Burger is incompetent.  There, I said it.  In the series Hamilton Burger (played by William Talman shown in the photo at right) is the Los Angeles District Attorney (DA) who almost always goes up against Perry Mason (defense attorney), and I claim is a very bad, a very poor, attorney.  And that’s what fans will disagree with me about.  But here’s my evidence, circumstantial as it may be…

Some like to point out Hamilton is interested in truth and justice and not winning… which highlights the “it’s only a tv show” aspect because real life certainly wouldn’t be that way, and it still doesn’t excuse his overall inadequacy as a prosecutor.

Some also like to speculate he wins most other cases, but we have no evidence for that.  All we have to go by is what we see in the show, and it shows constant ineptitude.  Sorry, I calls ’em as I see’s ’em.  In other words, Hamilton Burger is… wait for it… irrelevant, incompetent, and immaterial.

5 thoughts on “The Case Against Hamilton Burger”