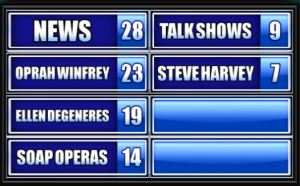 I had reason to spend some time in the hospital for surgery for almost a week last week.  Being a person with a ‘normal’ 8 to 5 job… actually 7 to 4… I normally never get to watch daytime television.  And I use the term “get” loosely.  With all this spare time as I was literally just lying around, I reluctantly gravitated to the television.  The options roughly break down into the following categories…

If it’s a legitimately informational topic it’s on Sunday mornings.  If it’s funny and entertaining, it’s on weeknights after the nightly news.  If it’s anything other than informational or entertaining it’s on weekdays.  Pretty much that simple.  Jerry Springer inducing fights and violence, Maury seeking out as many unwed mothers with no idea who the father is as he can find, and the more recent addition to the daytime tv lineup, the all-female estrogen-laden panel talk show, complete with a screaming adoring audience who worships the panels members more than the topics.

Not as common as they once were, game shows kind of ride the edge.  Some actually aren’t too bad, i.e. Jeopardy, for example.  Wheel of Fortune is generally good.  Price is Right has sunk, and the new Let’s Make a Deal has become lame.  I miss the old Match Game with the long penis microphones.  And whatever happened to Password?  Would anyone watch it if it were on again?

Ugh.  Just shoot me now.  These shows are lackluster, insipid, unimaginative, tedious, unfun, anemic… bor-ing!!!  Everyone is so serious.  Even half-hearted attempts by the people who live in these towns to have fun aren’t really sincere and always fall short.  I mean, what is the attraction of watching people operate in constant dry misery?  Ever since I was a teenager I have always thought:  If I lived in a place like that, where everyone is ceaselessly trying to screw over everyone else, I’d move!

Cable and Satellite are no better than the traditional networks.  At least we have Netflix!  At least then I can pick and choose according to actual entertainment value, and my individual preferences, which are clearly superior to that of the masses.  I am currently semi-binge-watching Fawlty Towers, which should go quick.  I will be perusing a lot of WW2 documentaries in the next several weeks while I’m off.  And all I can say is, thank God for Forensic Files!