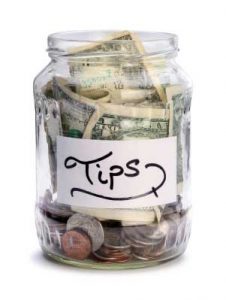 It’s been roughly six months since installment number one, but here we go.  As always, since so many people have the impressive ability to take a moderate statement and see only the most extreme (and incorrect) interpretation, let me reiterate that I have no issue with the concept of tipping… in general.  Leaving something extra for people for providing good service is a good thing.  That being said, tipping has gone too far.  It’s no longer viewed as an earned reward, it’s viewed as an entitlement… to the point that many people admit to giving a pre-emptive tip just so they won’t get screwed… even in occupations that aren’t legally paid less than minimum wage.  With that being said, let’s cover a couple more subtopics…

Tip Jars:  😐  Really, who thought this up?  Worse yet, why do so many people fall for it?  I suspect this may be one of those subjects that most people will claim they never do it, like shopping at Walmart or eating at McDonald’s, yet just as those businesses are hugely successful (somebody’s shopping/eating there!), you see tip jars almost always full.  And there’s a social peer pressure in tipping, especially if the tip is somehow going to be known to people around you.  Almost being held hostage for your change, or a public shaming, if you will.

I think the worst example of a tip jar that I have ever seen is one on a shelf outside a fast food drive-thru window.

Nothing is absolute, I get that, and there are a few situations where a tip jar is totally legit.  A piano player in a bar, for example.  That’s a simple matter of practicality, the player’s hands are busy and you don’t want loose bills falling to the floor getting scattered around.  But the idea has grown absurdly since the smoke-filled piano bars of the 1960s.  Now tip jars are ubiquitous.  They’re everywhere.  Go to Dairy Queen for a cone?  There’s a tip jar.  Pick up your dry cleaning?  There’s a tip jar.  Grab a soda… 100% self serve, no less… at the local convenience store?  Damn, you can’t swing a dead cat without hitting another tip jar.

Tip jars are essentially a passive form of begging.  Somebody has to take a stand, and I guess it’s me.

Tip sharing:  Let me be up front, I have never worked as a server.  I have never worked a job that depended on tips.  But, I do have a lot of restaurant experience from my younger days and casually chatted often with servers, and I was married to someone who labeled herself a “professional server”, and *our* income was tip dependent to some degree.

Plus, it’s really not fair to me as the customer.  The server is the face of the transaction, the person I dealt with and the person who made the impression that influenced how much I tip.  That’s the person I’m tipping.  Furthering this concept, there’s a national steakhouse chain where you get a server who takes your order and gets your initial drinks, then other people actually serve your food (usually having no idea who gets what, I still don’t understand this).  Other people get drink refills here and there.  You never see your server again until it’s time to deliver the check and pitch dessert.  Who am I tipping?

Bottom line:  I want my tip money to go to the person I think it should go to, and I don’t feel unreasonable in expecting it to be for something more than the basic job description. 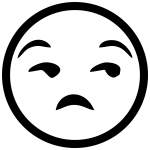 First world problem, I know. (I love that phrase!) It’s been almost a month since my last post. That’s outrageous! I mean, there have been lots of little things that have been annoying of late, so all hope is not lost, but nothing really pen-worthy. For example: I’m eating as I write this and I spilled something on my shirt. Damn that’s annoying, but I already wrote about that. See what I mean?

Overall in life things aren’t going as superdupolous as they could be, but neither are they horrifically bad, either. Just cruisin’ along, in the middle lane, wondering when it’ll hit the fan again.

Here’s an annoyance: We’re going to see Alice Cooper next week. His new CD is awesome. Only two songs I don’t care for. I looked at his current setlist yesterday and noticed he’s playing only two songs from the new CD… and one of them is one of the two that I don’t like. 😐

Still going to be a good show, though. He has lots of great material.

Another phrase I like, and from Alice Cooper:
“I ain’t evil,
I’m just good lookin'”
Opening lyrics from “Feed My Frankenstein”

Perfect example. Yes, there is an annoying aspect there, but there’s also an awesome counterbalance. What’s a grump to do?  <shrug>